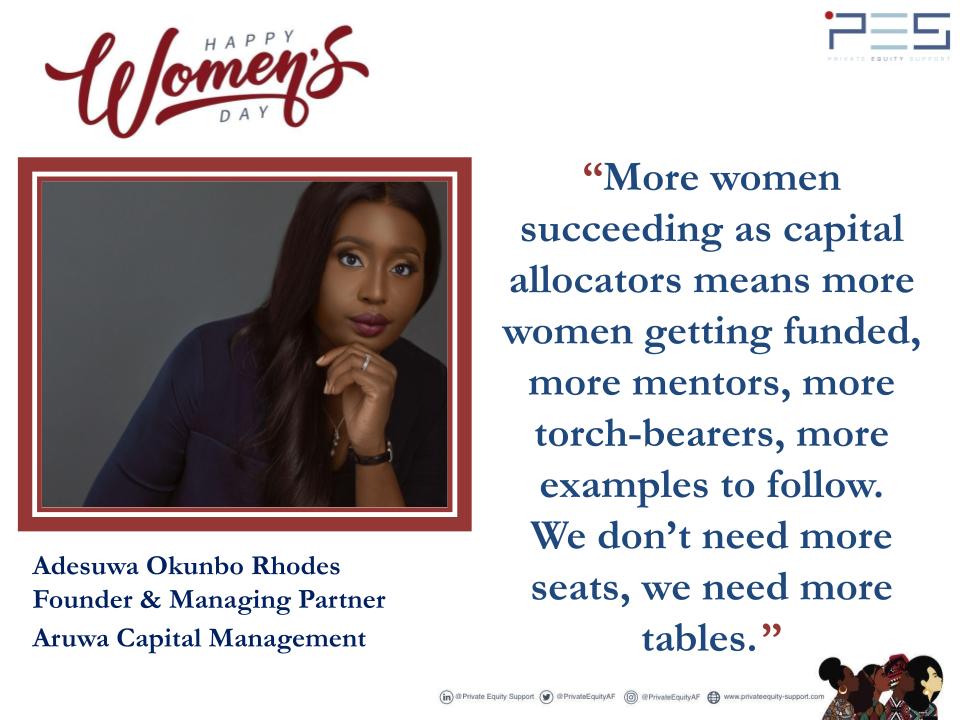 Diana Gichaga, Managing Partner of Private Equity Support recently spoke with Adesuwa Okunbo Rhodes, the Founder and Managing Partner of Aruwa Capital Management, one of the few female founded and led, growth equity, impact investment companies in Africa. Aruwa Capital is focused on investing in established, rapidly growing companies in the small to lower mid-market that operate in high-growth industries and has a strong gender lens investment focus.

DG: Why is Gender Lens investment important, specifically for SMEs in Africa?

AR: In Africa, we have the highest rate of female entrepreneurship in the world, almost four times as much as Europe, but yet there is a $42 billion funding gap between men and women entrepreneurs in the continent according to the African Development Bank.

Gender lens investment is important because it’s not only the moral thing to do but the business case of investing in women has also been proven to enhance returns and profitability.

Women make up half of the population and are typically re-investing 90% of their income into healthcare and education for their children and family. When women are given an opportunity to access capital, run and scale their businesses, the benefits extend to their children, families, communities, society and the economy at large. There is such a significant multiplier effect when women are empowered in society and it can be a huge driver for job creation and poverty alleviation on the continent.

In addition female founders have been proven to outperform. According to BCG every dollar of funding invested, start-ups founded and co-founded by women generated 2.5 times more than male-founded start-ups. Despite the overwhelming evidence, in 2021, single founded female startups and female only founding teams in Africa raised less than 1% of funding and less than 7% of the funding went to female CEOs. Gender lens investing is so critical in Africa for the continent to realise its full potential.

The gender gaps we see in society are directly correlated to the fact that we don’t have women as capital allocators. In Africa, there are less than 20 private equity funds owned and led by a woman that have successfully raised capital since 2008, and this figure is even lower for African women. Aruwa Capital Management was founded on the conviction that the gender imbalance amongst capital allocators on the continent provides a unique opportunity to invest in untapped segments of the economy whilst closing gender economic gaps across society and generating enhanced returns. With few private equity funds owned or led by women in Africa, we aim to change the narrative for women as capital allocators, entrepreneurs, consumers, and stakeholders in Africa and globally

DG: What are some of the positive changes you have witnessed in how women led or owned businesses are funded?

AR: The positive changes I have seen are the more women stepping up to launch and run their own funds. Globally we have seen gender lens investing funds increase from only 58 in 2017 to 206 in 2021 according to Project Sage 4.0 by the Wharton Social Impact Initiative and consultancy Catalyst at Large.

The total capital raised by gender lens funds was approximately $6 billion globally according to the report, which represents some hope that more women owned business will begin to get funded.

There is a more conscious effort globally to realise one of the last arbitrage opportunities left in venture capital and private equity – gender lens investing, where there is a seamless intersection between profit and purpose.

DG: Parting remarks on this

AR: I believe the way to effectively provide women with more seats at the table is for us to create our own tables. More women succeeding as capital allocators means more women getting funded, more mentors, more torch-bearers, more examples to follow. We don’t need more seats, we need more tables. Investing in gender lens funds and funds owned and run by women is a practical way to narrow the gender funding gap