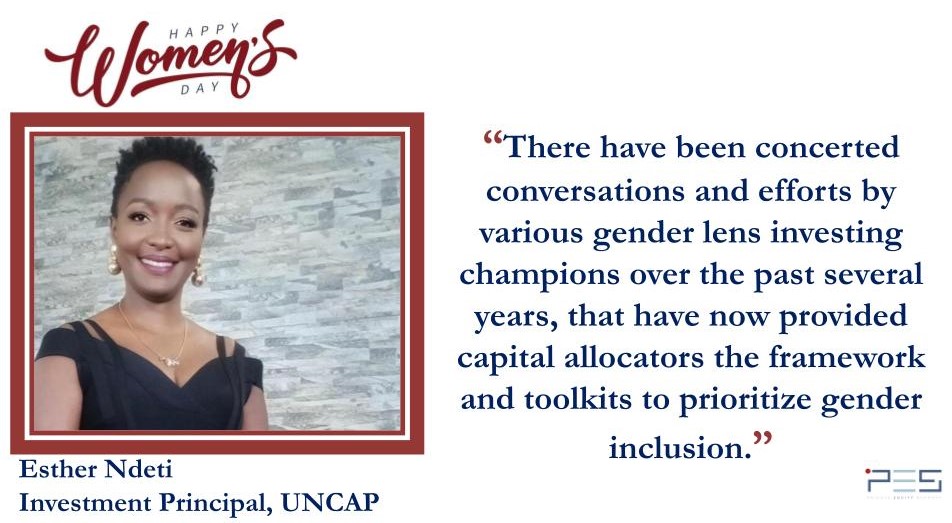 In wrapping up a season of celebrating women’s month in March, Diana Gichaga, Managing Partner of Private Equity Support, sat down with Esther Ndeti, the Investment Principal from Uncap (Unconventional Capital), an investment firm funding early stage investment opportunities in Kenya, Uganda, Rwanda and Nigeria through a ‘revenue based financing model’.  In the article below, we discuss her perspective on Gender Lens investing.

DG: Why is Gender Lens investing important, specifically for SMEs in Africa?

EN: Deliberately integrating a gender lens into investment analysis and decision-making is critical to redress the imbalance between men and women in the business & finance community in Africa. The lack of gender equity has been a systemic issue in the financial markets throughout its existence, so women-led businesses have been overlooked by capital allocators for far too long.

Currently, there is a $42 billion funding gap for female entrepreneurs in Sub-Saharan Africa. Despite this, 2021 data shows that less than 7% of funding went to female CEOs in Africa, with less than 1% to single female founders and female-only founding teams. It is estimated that $316 billion in GDP could be gained by 2025 if the gender gap in Africa is bridged, therefore addressing this disparity is critical to unlocking great economic potential on this continent.

EN: Like so much in life, solving the gender funding gap has no silver bullet. For investors, we’ve now come to the point where action speaks louder than words. The questions have now shifted from ‘whether’ or ‘why’ we should place more capital in the hands of women, rather the question of today is ‘how’ we do so, at speed.

Fortunately, there have been concerted conversations and efforts by various gender lens investing champions over the past several years, that have now provided capital allocators the framework and toolkits to prioritize gender inclusion. Cementing this progress, we are beginning to see the surfacing of female-led funds, more women in investment management teams, a diversification in the types of capital being deployed to better meet the needs of female founders in Africa, an integration of gender lens metrics into ESG standards by various funders, amongst other systemic changes that will ultimately place more capital in the hands of women.

At Uncap, our key mission not only lies in democratizing venture funding but in closing the gender finance gap in Africa. We ensure female entrepreneurs get an equitable experience by intentionally re-defining their fundraising journey through; data driven investment decisions, a hybrid revenue-based financing investment model, a remote and automated fundraising process and by expanding the frontier for female entrepreneurs in non-traditional sectors.

DG: What are some of the positive changes you have witnessed in how women led or owned businesses are funded?

EN: For years, female founders have faced an uphill battle – raising only a fraction of the funding that their male counterparts get. While that uneven playing field can be hard to overcome, the ecosystem is slowly starting to shift. There has been an increased acknowledgment of gender bias

by investment practitioners, leading to more deliberate efforts on gender inclusion in the investment teams and processes. It has certainly been encouraging to see more emphasis and intention in allocating funds to African women-led businesses.

Personally, I’ve been excited to see the emergence of funds and vehicles with explicit mandates to invest in women, such as Rising Tide Africa, Enygma Ventures, Graça Machel Trust Investment Fund, FirstCheck Africa, ShEquity, Alitheia IDF, WIC Capital to mention but a few.

DG: Parting remarks on this

EN: Capital allocators now need to move with more urgency in ensuring gender equity across Africa. To quote a fund manager I heard speak recently, “The cost of not addressing equity is not just a morally unjust world, but one where we are not recognizing our collective potential.”