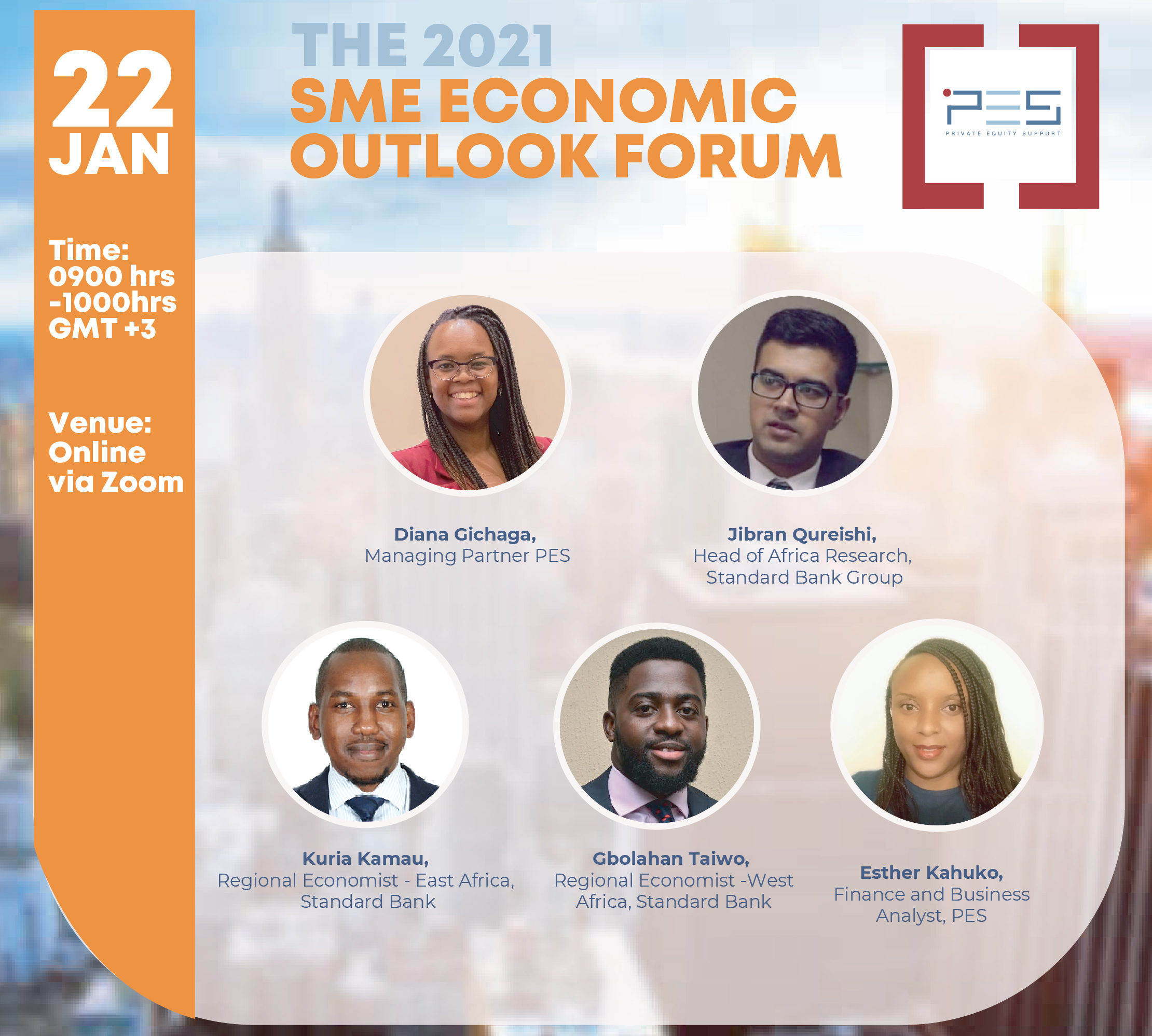 “Our 2021 outlook for growth globally could be phrased as ‘guarded optimism despite vaccine roll out’. The global economy in 2021 is likely to be  characterised by an environment with a weaker dollar, increasing commodity prices and higher inflation rates’, stated Jibran Qureishi, Head of Africa Research at Standard Bank during the Annual SME Economic Outlook forum held virtually by Private Equity Support (PES).

“Most African economies are poised to have positive GDP growth in 2021 with exception of Angola,” explained Jibran Qureishi. “The key thing is how we interpret this growth, because GDP growth is probably not the best indicator for underlying consumption growth as we have seen for the last few years on the continent. Governments need to formulate policies that promote inclusive growth and promote the much-needed multipliers associated with this.”

“This would likely explain why SMEs we engage with across the continent tend to query GDP growth figures when they do not necessarily see this reflected in their bottom line,” noted Diana Gichaga, Managing Partner of PES.

The Standard Bank Africa Research team noted the optimism that the Africa Continental Free Trade Agreement (AfCFTA) had created, bringing together about 1.2 billion people and a combined GDP of over USD 2.5 trillion.

“Though the benefits of trade agreements are sound in the long term, their operationalisation historically shows that economies that are more industrialised tend to benefit more initially,” stated Jibran Qureishi.  “SMEs should not be discouraged by the short term adjustment costs like potential decline in wages or predatory competition driving down prices but instead focus on long term possibilities that are very sound from such trade agreements.”

He summarized that the debt service suspension in Kenya would likely support the external account in 2021.

“The Ugandan currency has been relatively stable owing to portfolio investors buying bonds in Uganda chasing attractive real yields, providing the much needed forex to cushion the Ugandan shilling,” said Jibran Qureishi.  Uganda’s Foreign Direct Investment was USD 1.7 billion in 2019, of which USD 1.3 billion was non-oil related investments, such as those in the industrial sector.

“SMEs in Uganda would be justified in projecting higher performance outlook when engaging with investors on the back of an expected increase in consumer demand, reduced utility costs and the relatively stable currency,” stated Diana Gichaga, “though this does not negate factoring in worst case scenarios.”

“Kenyan economy as measured by GDP is projected to grow at 5.7% in 2021 with the manufacturing, trade, education and transport recording the highest level of  growth,” stated Kuria Kamau, Regional Economist for East Africa, Standard Bank. “There is an increase in business activities with the lifting of the restrictions as companies are able to operate for longer hours thus increasing productivity.”

“Nigeria experienced the biggest decline in growth in decades because it came into the pandemic period with pre-existing vulnerabilities such as sub optimal growth, high inflation and unemployment which was worsened by the pandemic,” noted Gbolahan Taiwo, regional economist West Africa at Standard Bank.“

“This negatively impacted the purchasing power of the consumers significantly, with corporates  downsizing  consumer good packaging sizes into small sachets as a result of this,” noted Gbolahan Taiwo.

Additionally, FDI in Nigeria has been minimal and decreasing, averaging less than a USD 1 Billion annually in the past 4 years from highs of USD 4 billion in the preceding years. The GDP growth outlook for Nigeria is at 0.9% though recovery is expected in quarter 2 of 2021 driven by growth improved economic activity and unwinding base effects.

Ghana has a broad based diversified economy, with forecasted GDP growth at 4.8%. The currency will remain supported in the near term owing to foreign portfolio inflows but could depreciate and breach the 6 mark as economic activity improves through the year.

“The key aspects that will assist SME growth under the AfCFTA is ensuring that non-tariff barriers are eliminated, and better infrastructure connectivity exists between trading countries,” noted Jibran Qureishi in conclusion.

“SMEs at a micro level will need to factor in the information they received today to see how best to position for growth,” stated  Diana Gichaga. “Understanding how the various macroeconomic factors  affect their growth as SMEs and impact their clients, will assist SMEs understand which customer segments will likely drive their growth.”

The SME forum, held virtually, was attended by participants from across various African countries including Kenya, Tanzania, Uganda, Ghana and Nigeria

For more information kindly e mail us at info@privateequity-support.com

SME Performance Management Amidst The Lasting Effects Of Covid-19